Raising pastured poultry is a simple way to integrate livestock onto small farms. They are suitable for farms that do not currently have livestock, or they can be raised in a system that includes other types of animals.

This page summarizes our experience with small-scale pastured poultry production on our organically certified land at WSU Puyallup from 2005-2012. We began raising pastured broilers with the goal of integrating them into a vegetable-pasture rotation in our organic farming systems experiment.

We used small (5’x 10’), lightweight traveling cages for housing the birds on pasture (see design plans below). Each cage held up to 35 birds and contained two feed troughs and two independent watering units. Cages were rolled daily onto fresh pasture using a dolly system. We supplied feed and water to birds as needed once to twice daily. The pasture areas were enclosed with a portable electric fence to provide extra protection from predators.

Each bird was weighed when moved to the field, at intervals during their life cycle up to the time of slaughter, and after dressing. We also measured daily and total feed supplied to the flock to determine feed conversion. In 2007 and 2008 we participated in a project to study lactic acid as an organic alternative to chlorine bleach for carcass sanitation during processing (see Publications). 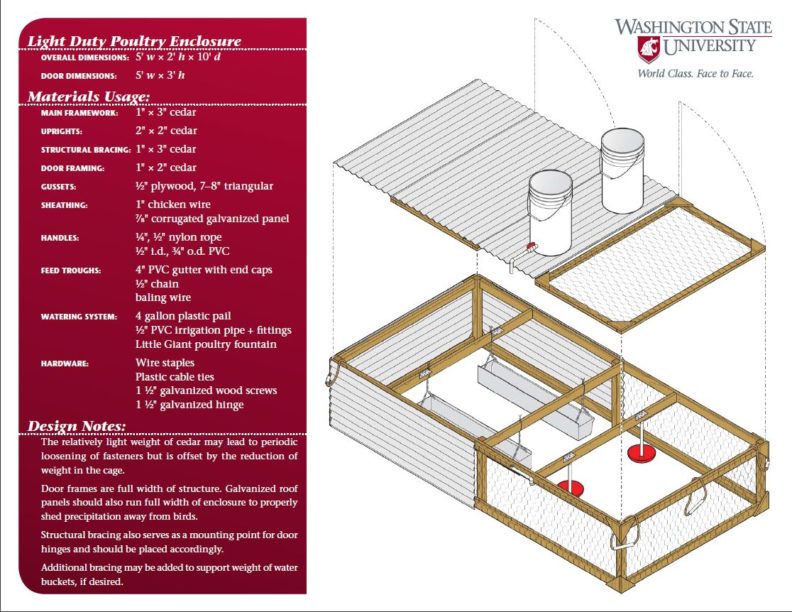 Bird survival and weight, feed use, and feed conversion are summarized in Tables 1 and 2 below. Fast Cornish Cross chickens had much better feed conversion than the other breeds, but otherwise did not function as well in the pastured poultry environment. This was especially true in 2006, when we lost many birds late in the season because of heart attacks or inability to walk. The Fast Cornish Cross also tended to have more difficulty moving with the cages, especially in the final weeks before slaughter. Feed conversion was lower in the spring of 2005 than in the later trials, likely as a result of not switching from chick grit to hen grit after they were moved to the field. Feed consumption and bird weights were down in 2009 due to a 10 day hot period when birds didn’t eat or gain as much.  In 2012 the Fast Cornish Cross ate more feed than previous years, but didn’t grow as well as previous years.